Waiting For the Sunset


Porto, Portugal is situated on the Douro River, just a bit inland from the Atlantic on the west coast of Portugal. Our apartment faces east, so we do not see the sunset, but we had heard that it was pretty special. We got to see the glow from the setting sun on the opposite riverbank, but never a glimpse of the actual sunset. Tonight we decided that one of our Portuguese adventures would be to all go across the river and watch the sunset. We packed a picnic lunch, two bottles of Portuguese Vino Verdi, and a couple of cans of Super Bock beer.

The bridge beside the apartment is a two level bridge with cars using the bottom tray and trams using the top tray. There is a pedestrian walkway on each level, but to get the best view of the sunset, our UBER driver from earlier in the day, suggested going to the park across the bridge on the upper level. He said the best sunset views were from there.

So as the day started turning to evening, I set out to meet everyone else across the river. I was carrying the olives, napkins and the all important wine cork/bottle opener. 135 steps to the top of the hill and then across the bridge to the opposite side of the river. The Park across the river is situated perfectly to watch the sunset. The Douro River flows out to the Atlantic here and the river rounds a bend and flows due west as it exits the city. The park is high on a hill looking out towards the mouth of the river, so the views are perfect. You see the river, one of the five Porto bridges, and the old historic city climbing the hill across the river.

Sunset watching is obviously a popular activity in Porto. The park slowly filled up with people as the skies darkened. The park has rows of concrete walls perfect height for sitting to watch the sunset and
I managed to snag a prime section of wall. We arrived about 45 minutes before sunset so the park was just filling up, but as it came closer to the sun going down a steady stream of people came across the bridge and up from surrounding neighbourhoods. The park rapidly filled up with people. A busker arrived and set up with a guitar and small amplifier to play popular songs for everyone. There were vendors selling popcorn and beer, so obviously drinking wine and beer in the public park is not a problem. A family sat down the wall from us, and a little boy took it on as his personal mission to chase the “rats with feathers” (pigeons) away. Overall the park developed a festive carnival like atmosphere.


Clouds did roll in for a while and there was some concern about the sunset, but fortunately a few clouds usually make a sunset more dramatic and Porto did not fail to impress, producing a beautiful sunset over the Douro River. A great end to another nice day in Portugal. 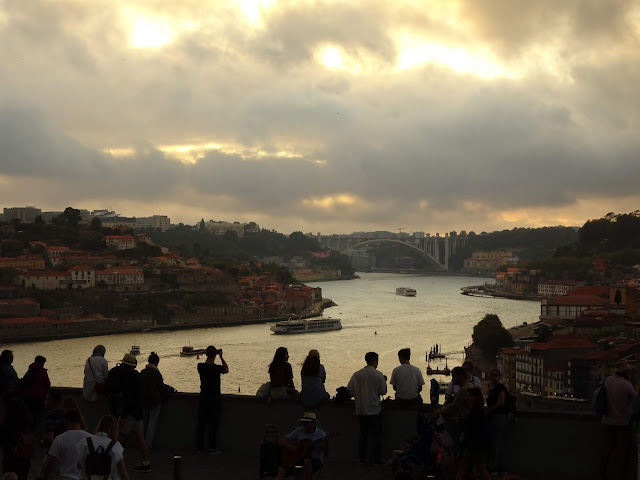 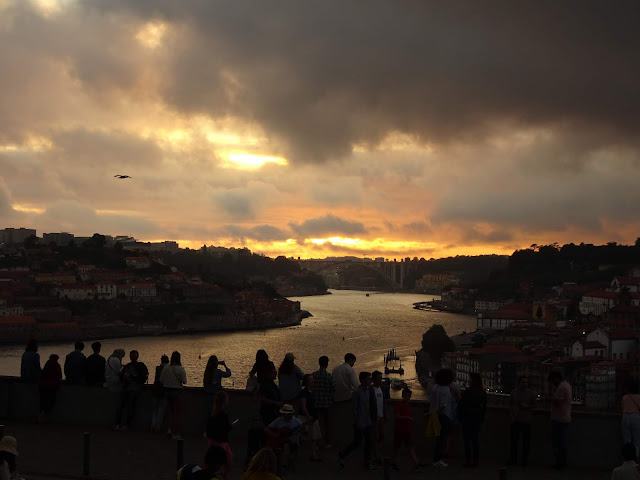 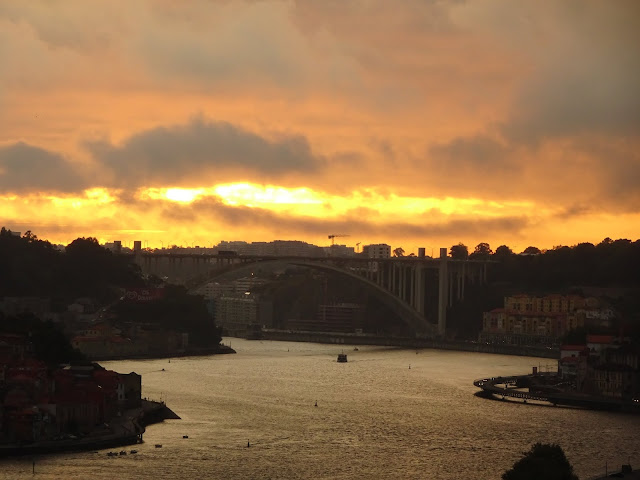 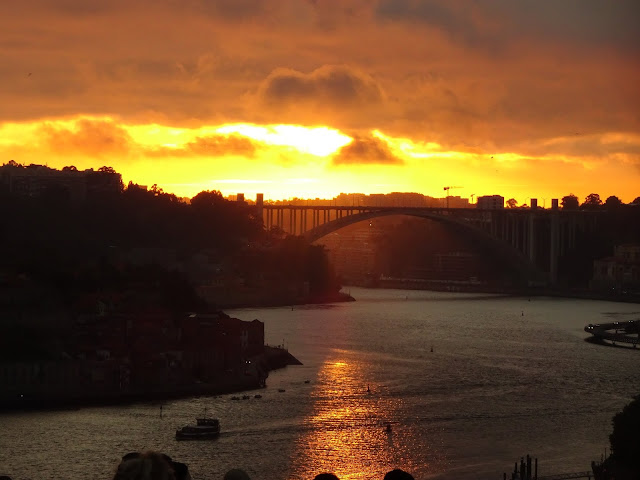