The first year I retired, I went with Regis to Montreal while she was attending a conference, and I discovered the “underground city”, which was 33 km of tunnels connecting buildings in downtown Montreal. The tunnels allow people to move around the city under the cold and snow of the Quebec winters. With time on my hands, I really enjoyed exploring this interesting underground part of the city. I even found a nice linen suit I had been looking for in a little shop in one of the tunnels.

Years later while picking up a cruise in Houston, I discovered they also had a “tunnel” system. In Texas of course the goal is to keep people out of the summer heat rather than the cold, and their tunnel system is just under 10 Km long, but it is very well organized, and new building in the area are required to connect to the system. I wrote a Tripadvisor review of this attraction after walking most of it one afternoon, entitling it “How not to see Houston”, and for some reason this title attracted hundreds of readers, the most of any of my reviews by a huge margin.

On this trip to Toronto I explored Toronto's tunnel system. It is called PATH, and is over 30 km long and contains over 4,000,000 sq ft of retail space – the largest underground shopping complex in the world. The bulk of the PATH system is under the “Financial District”, so its primary use is during business hours, and on a damp rainy Saturday when we decided to explore the PATH not only were the tunnels mostly deserted, nothing much was open. You could follow the PATHs, but most stores and restaurants were locked up
tight. Apparently over 200,000 people use the tunnels most days, but we were often completely alone.

The PATH, is often very difficult to follow. You are underground, so have no reference points to follow and the tunnels turn and twist through buildings, subway stations and food courts so it is easy to get turned in the wrong direction. The city has developed a system of directions and signage to help explorers find their way around, but we discovered that although the signs help when you can find them, some areas do not have any signs. Union Station for example which is confusing anyway contains minimal signage. They use a system of coloured arrows to show which direction you are headed, Blue - North, Yellow – East, Red – South, and Orange – West. You would think this would help, but we discovered one sign that had the colours and the directions mixed up and we headed in the wrong direction.

It was a good way to spend a damp morning, and we had
pretty well fulfilled our “Toronto To-Do” list, and I will certainly be coming back to see what it is like during a business day. 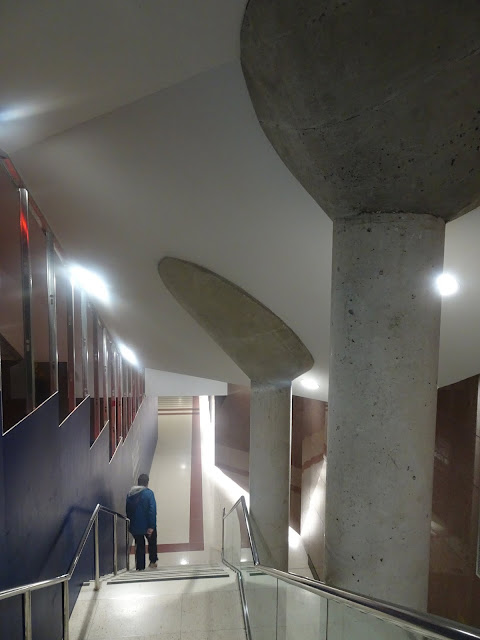 Posted by Art.hill@gmail.com at 6:35 PM No comments:

It was raining today, but we have spent time in Scotland, where it seemed to rain each and every day, so we decided to venture out anyway. Our plan was to walk the Beltline Trail which runs close to Ryan's condo. 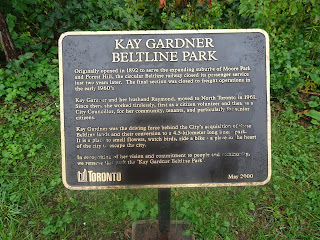 The Beltline Trail is a trail that runs east/west through Midtown Toronto. It utilizes the converted railbed from the old Toronto Belt Line Railway which was a commuter line established in 1890, but closed two years later after being unable to turn a profit. The city bought the rail line and tore up the tracks creating the trail in 1989. The trail is aprox. 9 km long, and joins with the trails through the the Mud Creek Ravine trail system and past the Evergreen Brickworks park. The trail ends in the neighbourhood of York at Eglinton West.

We joined the trail at the Yonge St. Bridge which crosses the Davisville Rail yard not far from the condo. Here we met the amazing train-spotting dog. As we came up to the bridge I saw a little dog eagerly peering through the railings looking for the subway trains which runs above ground here. I stopped and commented to his owner about his interest in the trains. She said it was his favourite activity. As the train approached, his tail started to wag eagerly and when the train roared under the bridge, he frantically ran to the other side and watched the train disappear into the station. Once the train was gone, he contentedly continued his walk.

The nice thing about this trail is that it is a narrow strip of green running right through Toronto, passing various neighbourhoods, including some amazingly huge houses worth many millions along with apartment blocks and many ordinary neighbourhoods. Along the way, the trail is intersected by a number of roads where you have to stop and cross when traffic allows, but you are then back into the lovely green walkway. The trail is well used and we met with many people and a number of dogs besides the amazing train-spotting one. Doing most of my walking in the friendly green space of Shube Park back home, people here in Toronto were taken back by these strangers greeting them with a “Good Morning”. Although obviously not the norm here in Toronto, most people smiled and returned with a friendly greeting as well.

The section of the trail we used ended with an enormous brick sound barrier at Allen Ave. Apparently you can cross this busy road and find the trail on the other side, but we took this as a spot to turn back and we continued our walk along the busy Eglinton St. Back to Yonge st.

Although prepared for rain, we managed the entire walk without getting wet until we got back to the condo, so it turned into a very pleasant morning walk.