Regis and I like cooking, so when we travel we like to rent apartments that have decent kitchen facilities so we can find local markets, buy local food and experiment with the local cuisine. Here in Cascais, we were only staying for a week, so were not that concerned with the cooking. Good thing, because the kitchen is the size of a closet. It does have a bar fridge, a washer, a microwave, a toaster, a kettle and a little two burner stove sitting on the counter, but not really a good kitchen to do much cooking. We cooked breakfast, made soup and sandwiches, but mostly we ate in the many local restaurants.

The food we have experienced has been amazing. We have yet to have a bad meal. During our travels we have learned some things about eating in restaurants. For example we have learned that if the cafe has to hire some fellow to go out on the sidewalk to entice people into the door, it is probably not that good. In contrast if you look inside and the place is full and you cannot understand a word of the chatter going on, it is probably 'local-approved' and the food will be good authentic local cuisine. Also, don't always take the recommendation of your host; the spot suggested by him was probably the least exciting place we ate.

On the first day we arrived the fellow who rented us the apartment suggested a place downtown and although it was good, it was not especially exciting. The next day we found ourselves exploring the fort converted to hotel and art sector. There was a little cafe on one side of the central courtyard, and their menu sounded very interesting. We ordered three appetizers, broad beans & chorizo, Octopus salad and prawns. An excellent meal! The next day we actually did our research and decided on two restaurants that sounded good but both were closed, so we chose a random little spot on a side street downtown and I had an amazing grilled bream (One of my favourite fish), and Regis had a wonderful lasagna.

We ate at a little spot in Estoril while waiting for the casino to open and had a delicious Italian style pizza. On the way home that day we stopped at a spot down in the local marina and had more Italian; also delicious. You have already read about our adventure with “Fine” dining and bike riding the next day, and yesterday we went back to one of the restaurants that was closed previously. This spot was highly recommended by a good friend who had visited Cascais earlier, but unfortunately it remained closed and we were unable to translate the hand written note on the door explaining why and when it would reopen. Instead we went to a spot that was highly rated on Tripadvisor, a tiny little wine
bar and restaurant that only sat about twenty people. As we entered the front door we were greeted by a full room and a cacophony of Portuguese; a good sign, remember. Fortunately it was a lovely day and there were two little tables outside under a tree, and one was free. We joined a couple from Belgium under the tree and left the locals inside. The menu was amazing and I was told that they had two specials today featuring wild boar or octopus; OMG what to choose. I finally decided to try the wild boar steak and Regis ordered a seafood stew, but the appetizer menu had so many interesting items I decided to splurge and ordered a local wild game sausage. I was expecting a sausage but what arrived was a perfectly cooked fried egg surrounded by sausage slices, broccoli and home-made potato crisps. The appetizer was delicious and our mains were equally good. Then to top it all off, the owner/chef came out and apologized for the meal taking so long. We hadn't even noticed . . .


And we still have one more day here in Cascais . . . where to eat today?

Posted by Art.hill@gmail.com at 2:24 AM No comments:

We visited two museums here in Cascais which demonstrated some of the beautiful design and artwork used in building ordinary houses for people to live in. One was the Casa De Santa Maria which was included in a visit to the lighthouse museum, and the other was the Museu Condes de Castro Guimaraes. The second one we came upon while out for a walk the first day here. It was such a beautiful building in a spectacular setting, that when we discovered it was a museum, we used our senior discount and explored the house for a total of 4Є. The Casa de Santa Maria was across the road and on the same little inlet from the ocean.

Both of these houses date from the early 20th century and feature strongly the typical Portuguese use of painted ceramic tiles both inside and out. We enjoyed this style when we visited Olhao a few years ago where we discovered so many of the houses in the old part of town were covered in coloured tiles rather than shingles or siding. Olhao was a simple fishing town so the style there was simple and functional, where here these houses were obviously designed and built for wealthy folk and display more elaborate design. In Olhao the tiles were use to cover the entire sides of the houses where here they seem to be used to decorate and enhance the facade of the houses. I would say that they were also used for practical purposes as well, as in the Casa de Santa Maria, the entire basement was tiled from floor to ceiling. The basement in this house was used as the kitchen and work area for staff, so although beautiful, the tiled walls would have been easy to clean, and considering that they remain bright and clean 100 years later, no painting to do ever, but hopefully you never get tired of the design.

The other feature of these houses are the beautiful arches and curves. Doors are often framed in arched stone and decorated with coloured tiles, as are the windows. Even the ceilings are often works of art with decorated wood or tile.

We really enjoyed visiting these two beautiful houses turned museums so I am sharing some of the many photos I took while exploring.

The Cliffs on Cascais

The train from Lisbon to Cascais was crowded, so crowded that at one stop people could not get on our car. Many of the people on the train were carrying coolers, beach chairs and umbrellas, and as we travelled along the coast many got off at stops along the way. I figured they were making day trips to the many beaches along this strip of the Portuguese coast. Cascais also has beaches but they are usually framed by steep rocky cliffs.

Today we left the apartment and rather than going down to the historic town centre, we turned right and walked out to the coast. We found a spectacular visitor friendly area. There is a road that meanders up the coast, and running beside it is a nice two way bike lane and a sidewalk. There were actually more bicycles on the route today than cars, and many people out walking. The route is flat and an easy walk or bike. We may rent bikes and explore further up the coast on another day.

The views all along are spectacular. There are no beaches here, just jagged black stone cliffs. In places there are large fissures in the rock bringing the waves crashing in closer, sometimes actually under the roadways through curved bridges. The sidewalk is separated from the cliff edge by a short stone wall, but you can see where many visitors are tempted to climb over the wall to get a view from the cliff edge, ignoring the “Unstable Cliff” signs. I did climb over the wall to take a picture at a spot that looked pretty safe, and while composing the shot, I noticed a pin and carabiner in the rock. I then noticed that a rope attached was moving and suddenly a helmeted head came into view; a rock climber. I guess those cliffs are not actually so unstable. Fortunately
strategically positioned along the route are designated view points where you can get closer to the action. At one point the rocks sloped gently down towards the water and you could get close enough to watch the water thunder into a cavity and blow mist up through a hole in the rock. If you stood close enough you would get misted every time a wave crashed. It was a warm day, but I was not hot enough to be tempted by this natural cooling spray.


On one of these cliffs overlooking the harbour to the town of Cascais there was a large fort built at one time obviously to protect the harbour from attack. Instead of restoring this fort, and making it a park, it has been turned into a hotel. Now you might say “How unfortunate!”, but in fact it seemed to work very well. The hotel has retained all of the old fortress outer walls and
the arched entry. They have converted some of the original inner fort buildings to Hotel use and added many modern hotel buildings to the site, but the modern sections do not reach much above the old walls, so the effect is quite nice. In addition, the fort courtyard has been converted to an art centre with galleries and studios all around. There were many large art installations throughout the complex, so the mixture of the old and new made for an interesting visit.


We also found a great restaurant among the art galleries. Surprisingly it was quite reasonable and unlike the many busy, noisy cafes downtown this one was quiet and peaceful, and we enjoyed a delicious lunch of Portuguese food.

All in all, it was a great day, although when Regis checked her fitbit we had walked 12 km and she is supposed to limit her walks to 3 km. 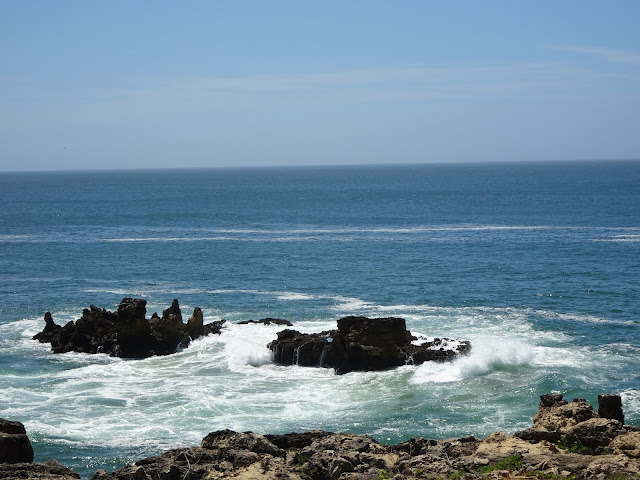