Balloons in the Breeze

I love to fly! I get a rush as the pilot throttles up the engines to lift thousands of pounds of steel and aluminium off the ground into the sky, and I love watching him bring the same plane to rest again in a squeal of tortured rubber down the middle of the strip of concrete. I recently had a vastly different “flying experience” at the Atlantic International Balloon Fiesta in Sussex, NB.

Coming back from an RV trip to Ontario we noted the Balloon festival in a New Brunswick Tourism Guide, and decided to go. We have a friend, Joan who is from Sussex, and after asking her about the festival we found ourselves not only with a guide to this New Brunswick town but also a place to stay for the weekend in her family homestead with her 91 year old mother.

Sussex is a vibrant, growing town in southern New Brunswick, surrounded by an active farming district. The town in just off the main highway between Moncton and Saint John. It acts as a hub for the surrounding area, and has a number of thriving industries keeping this maritime town growing where so many small towns are dying out at the expense of the large cities.

Arriving in Sussex early afternoon, we settled in and then left early to try to find a parking spot so Joan's mother would be able to see the balloons launch. She has lived in Sussex most of her life, but although the balloon festival has been taking place for over 20 years, she had never seen them close up. The volunteer at the “Handicapped Parking” entrance was sympathetic to Joan's stories, and we were able to get a spot for the car close enough that her mother could see the balloons launch without leaving the car.

Watching these balloons launch is an awe-inspiring experience. A field slowly filled with trucks and cars with trailers containing the balloons. As the time for the launch approached, the wicker baskets, large fans, and packaged balloons were pulled from the vehicles and began to appear around the field. After a couple of trial balloons (Always wondered where this expression originated) were launched to test the wind direction and speed, the real balloons were rolled out across the field, and la

rge fans fired up to inflate them. As the crew held the bottoms of the envelopes open, these fans forced air in, slowly revealing the shape and colour of the balloons. The field, once a simple green ball field, suddenly came alive with a riot of colour as the balloons slowly rose from the ground. Once the balloon envelopes filled with air, the propane burners were fired up and the air inside is heated and expanded. With crew members holding and steadying the basket, the heated air pulls the acres of brightly coloured nylon upright revealing the final shapes and colours. All over the field, balloons of all colours and patterns appeared. Pilots and passengers scrambled into the baskets, and the heated air tugged the huge balloons out of the hands of the ground crews and into the sky. One after an other, over 25 brilliantly coloured balloons ascended into the warm evening sunshine and floated away in the breeze.

My goal for the festival was to take pictures of the balloons, but as I snapped hundreds of photos on Friday evening, I quickly decided that this was one experience that I had to see from the other side of the fence. I wanted to go up in one of the balloons, and immediately signed up for a flight the next morning. My wife was not so brave, suggesting that I try it first, and perhaps she would go another year. She did however encourage me to experience it.

Arriving at the field at 6:00 Saturday morning, we watched the sun come up on a lovely calm September morning – a perfect day for a balloon flight. Paying my fee, I was introduced to Derald Young of Damn Yankee Balloons, who was to be my pilot for the flight, and we walked over to the balloon being prepared by his ground crew, many of them volunteers from the Sussex area. I was introduced to three other passengers who were flying with me, a couple from Northern NB, and a woman from the US. Watching the basket being readied, it looked very small to hold us all. It was interesting to stand beside the balloon as it readied for the fight, and being able to look up into the envelope watching the heated air shimmer in the early morning sunshine as the b

alloon pulled itself upright was truly an incredible sight. I climbed into the basket along with the other three passangers, and sat on padded seats on top of the propane tanks, leaving Derald to stand between our legs. We were then joined by a crew member, another balloon pilot from California, helping Derald on this trip. We did all fit, and although accommodations were tight, I was expecting to have to stand, so it was crowded but comfortable. 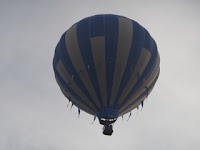 The actual “take-off” couldn't be more different from an airplane; you could hardly feel the balloon leave the ground. One minute we were on the ground, the next we were floating into the air surrounded by other rainbow coloured airships, floating across the field, over the power-lines and houses of Sussex. On the ground, your balloon and those around you tower over you so you can see very little, but as you become airborne, the balloons space themselves out and the view of the other balloons as well as the countryside around surrounds you. No windows, no seat-belts, no aluminium shell, just the early morning sunshine and gentle breeze. On the ground the September morning was chilly, but once in the air it was lovely. The breeze that felt chilly on the ground was carrying us across the New Brunswick countryside, so we did not feel it.

As we settled into a gentle flight over the town of Sussex, across the Trans Canada Highway waving to stopped cars, and over the farms, fields, rivers and forests of southern New Brunswick, Derald answered questions and explained the art of balloon flight. Although he told us that he had almost no actual steering ability and we were completely at the mercy of the breeze, his ability to find the air currents that would move us where he wanted to go gave us all confidence in his ability. He explained that this particular location is popular because it always provide

d a variety of wind and air currents that allowed the pilots to control their balloon's flight. The pilots search for these air currents by changing elevations by heating or allowing the air to cool within the envelope. As we flew along, we watched balloons below us skimming across the cornfields so low they were “Tickling the tassels” or descending to “Touch & Go” on the water in a pond, while others soared high above us. We flew beside the building of a potash mine close enough that we could talk to the workers taking a break on the roof. We watched one balloon catch a current that took her directly across our path, and another neatly fly between two trees. The flight was mostly completely silent except for when the pilot fired up the propane burners to heat the air to make the balloon raise.

The chase crew towing the trailer for the balloon has no more idea where the balloon is going than we do, and we followed their progress on the ground, driving ahead of us, watching us pass overhead and then moving on, trying to guess where we would land. After over an hour in the air, Darald started looking for a suitable place to put the balloon down. After rejecting a couple of fields, he announced he liked the gravel parking lot next to a building. The breeze would insure he stayed to the right of the power lines, and he should be to the left of the big yellow tractor. All four of us passengers were pretty confident up to this point, but when he informed us not to worry about the trees suddenly coming rather quickly towards us – that was all part of the plan; they were used to slow the final approach down a bit. “Hold on” he instructed. No need to worry, we gently brushed through the trees, and hit the parking lot with a little thump, bounced once and settled. Oops didn't see that dump truck entering the parking lot at the same time. Derald simply kept the balloon inflated above our heads until the load was dumped and then let the balloon envelope gently settle back to the ground guided by the chase crew who had arrived by this time. After packing the

balloon back into the trailer, Derald broke out a bottle of Champaign to toast a successful flight – a tradition apparently started when early balloonists appeased angry landowners by sharing their bubbly after landing in the middle of a field. Asked if the local landowners minded the many balloons landing in the fields around Sussex, Derald explained that all balloons carried an additional bottle of wine that was given to the landowner and the festival organizers held a lottery where anyone who had a balloon land in their farm was given a chance to win a load of lime for their fields.

The balloons launched twice a day Friday, Saturday, & Sunday at 6:30 AM and 6:30 PM. But festival organizers had Craft Fairs, parades, skateboarding shows, “Show & Shine” car show organized to keep visitors busy and entertained throughout the weekend. This was an ideal weekend with near perfect weather for Balloons, but if the winds were too high or if it was raining, the balloons would not have been able to fly. The festival is in its 24th year and is growing, so the successful days must generally outnumber the bad weather. I certainly plan to return next year and will spread the word about this wonderful event. Maybe I can convince my wife to go up next year???

Posted by Art.hill@gmail.com at 1:30 PM No comments: