Doors of the United Kingdom 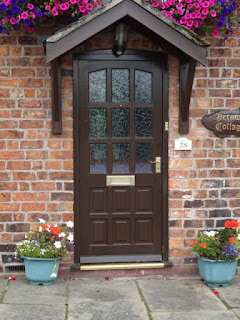 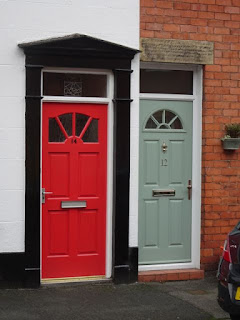 I always take pictures of doors wherever I travel, and this trip was not different.

These pictures were taken all through Wales, England and Scotland over the past month. 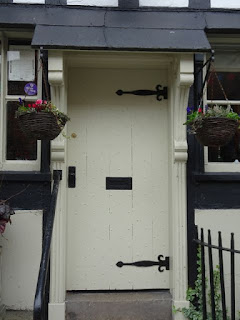 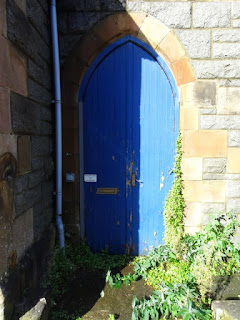 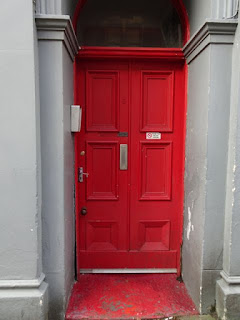 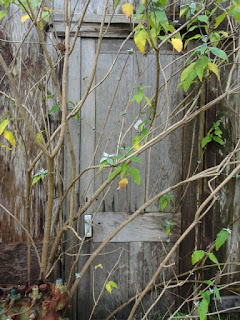 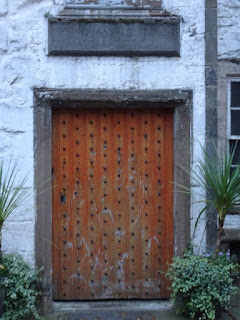 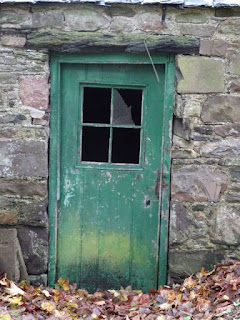 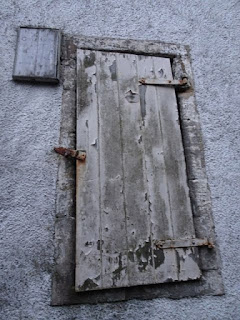 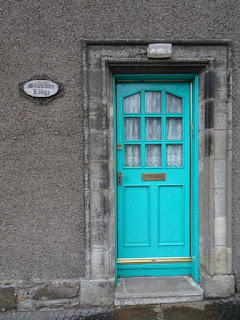 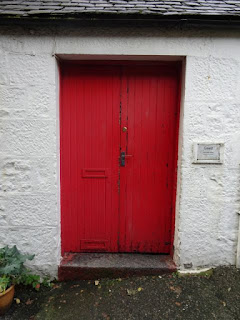 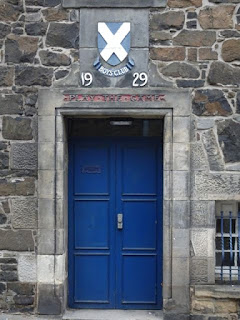 If you have been following my Blog during this trip to the UK, you might have noticed that it has rained quite a lot. In fact, I believe it rained every day. The interesting thing is that the rain did not really affect us negatively so much. While on the boat, when it rains, someone is going to get wet. If you are driving the boat, you are standing outside on the stern, and if you are the lock crew, you are walking alongside the canal in the rain. Everyone was prepared for this with full rain gear, so no one really minded the rain.

Once we were off the boat and touring Scotland, the rain was very cooperative. It still rained every single day, but somehow it seemed to work around our schedule. It poured rain in the morning while we were eating breakfast, but stopped by the time we were heading out. Or, the day started out sunny, clouded over and suddenly the clouds opened once we got back to the apartment. Or, we stopped at a pub for a pint, and while relaxing with a good Scottish beer, a downpour happened out on the street. It was occasionally 'damp', but we never actually got rained on.
Then on the last day in Paisley, we got wet.  We arrived early, and got settled in before going out for dinner. The girl at the desk had given us a couple of interesting sounding options for dinner, but when we set out it was raining. It was actually pouring, a steady heavy rain. After weighing the choices we had decided on an interesting pub a short walk into town.

In a strange new town, in the rain, in the dark, with rain jackets zipped to the neck and hoods up it was difficult to navigate, and we were getting wetter and wetter as we looked for the pub. Were we supposed to go past the Cathedral, behind the Cathedral, or beside the Cathedral?

Then, through the rain, across from the Cathedral appeared one of the restaurants the hotel clerk had suggested. Not the pub we were looking for, but a modern, quite fancy restaurant called the "Pendulum". Wet and a bit frustrated I agreed to forgo my "pub" preference, and give this place a try.
Best dining decision of the trip! This place had an "Early Evening Menu" of three courses for £13. We had an amazing meal, probably one of the best of the trip, all because the Scottish weather finally decided not to co-ordinate it's downpour with our outings.

We had a choice today driving south from Inverness, either take the motorway through Perth, or go through the mountains cross country. I was rested so I though I’d be fine on the secondary roads for another day, so we took the scenic route, “The Tourist Route” according to the signs.

We stopped at the town of Pitlochry for lunch and I saw a sign for a dam and dam visitor’s center. We had enough time on the parking so we wandered down to the dam. This was one of Hydro Scotland’s power generating plants and had been opened to the public as a tourist attraction. It is on a beautiful location, and the dam has created a lake behind it adding to the attraction.

Although the actual hydro plant is not open to the public, you can walk across the dam and look down into the plant through windows, although you can’t actually see much. There are interpretive signs explaining everything however. Once across the dam, there is a long fish ladder to allow salmon to get up the river past the dam. They have built an observation area where you can look into the ladder to see the fish climbing up. Although we did not see any fish, there is a digital counter that keeps track of how many fish swim up and the how large they are. This season, 4,091 salmon have used the fish ladder.

Walking over the dam we saw a footbridge downstream which would lead us back into the town, so we walked down along the river and crossed the bridge to a trail through the woods back to the town where we stopped to eat lunch.

On this part of the trip we have the time to do things like this. We only had a drive of about three hours, so it was nice to be able to see attractions like this which were not in our plans and fit them into the adventure.
Posted by Art.hill@gmail.com at 11:14 AM No comments:

Today we left Oban where we spent the past week and went north towards Inverness. This route took us along the coast for a while and then along a series of lochs, including Loch Ness.

As before, this was an “A” series road, meaning it was two lanes, but often I would come across “Lorries” (that’s Scottish for 18 wheels), on corners with barely a foot of space between him and me, and there were spots with the now familiar warning “Oncoming vehicles may be in the middle of the road”. It was however a beautiful drive through the Scottish highlands.

Driving along the Scottish Lochs, the most surprising feature is that they are generally completely undeveloped. There is nothing on them. There might be a small town along the way on the lakeshore, but mostly they are unspoiled beautiful lakes with trees and fields. Although after spending a month in the UK where it rained sometime every day, perhaps the Scots just do not see living near the water as a positive thing.

As you drive through the Highlands, you are constantly presented with place names from back home in Nova Scotia, especially Cape Breton, and realize that this is where they come from. These are the “highlands” that inspired the name given to Nova Scotia communities by the Scottish immigrants who settled in Cape Breton.

We looked for Nessie, but did not see her. However we did stop at the Castle Urquhart for a visit. It was cold and wet and according to the plaques around the place, the nasty Clan MacDonald, did a pretty good job of destroying the castle a number of times, so there was not much shelter from the Scottish rain. It was an interesting visit, and the castle, although nothing but a ruin now was well presented and you got a good picture of what life here was like.

Inverness is as far north as we go, and tomorrow we head back down to Sterling and Falkirk, and then to Glasgow for the flight home.
Posted by Art.hill@gmail.com at 12:53 PM No comments:

Back in “New” Scotland (Nova Scotia), we have friends with the surname of MacDougall, so when we discovered that the ancestral home of the MacDougall Clan was just down the road, we figured we’d wander over, drop his name and have a visit. It sounded like pretty swanky digs, high on a hill overlooking the mouth of Oban Harbour.

The Dunollie Castle, House and grounds remains the ancestral home of the Clan MacDougall, but the house is now mostly a museum, and the castle a majestic ruin on the hill. The house contains some interesting historical artifacts, and allows you to see some of the rooms in the old house. In one room there is a most amazing collection of over 5000 wooden spoons from the collection of Hope MacDougall, and another area displays shoes and shoe makers tools.

A climb up to the castle reveals the “consolidation” of Dunollie Castle. This means that the castle is too far ruined to be restored, so it has been stabilized and the remaining structures have been made safe for people to visit and explore. There really is not much left, just one tower, part of another and a small section of wall. It is not surprising, since the history on a handout seem to indicate that the Clan MacDougall ended up on the wrong side of Scotland’s rulers on a number of occasions and lost all their ancestral lands at least twice.

Walking down from the castle, you can wander through a beautiful willow garden where a local Girl Guide group had decorated a tree with painted wooden spoons, inspired perhaps by Hope MacDougall.

I was hoping to catch my friend Brian MacDougall at his ancestral home and thought I might share a wee dram with him, but mentioning his name did not even get me a reduced admission price, I had to play the “Senior” card to get a discount.
Posted by Art.hill@gmail.com at 10:26 AM No comments:

A Suitable Reward for an Arduous Climb

Well, Scotland is full of surprises; a rainy day was forecast but we awoke to sunshine, so we set out after breakfast to explore the town of Oban.

First we wandered along the waterfront and out onto the piers. Oban is the terminal for ferries going to many of the islands offshore, and there is a steady stream of these ships large and small coming and going. Pretty slick to see the large ones come into the harbour, turn and slip into the berth sideways. We found a nice looking fresh fish shop where we plan to get fresh catch for dinner one day.

After a delicious fish & chip lunch we decided to climb up the hill to the McCaig’s Tower. High above our apartment this structure was a mysterious building that invited investigation. It looked from a distance like a miniature Roman coliseum. Climbing hundreds of stone steps and steep roads and pathways brought us to a circular wall with arched windows all the way around.  Reading a sign informed us that this structure served no other purpose but to provide work to unemployed stone masons by a wealthy resident, John Stuart McCaig of Oban. He originally intended it to include an art gallery and a monument as well as statues of him and his family, but none of these additions were finished. Now it is simply a magnificent crown to the town of Oban providing great views out over the harbour.

We then wandered back through town to locate groceries for today’s supper, and back to the apartment after a day wandering the town.