Arriving in Glasgow we decided to take a city tour to give us a better idea of what to see and do during our days here. We quickly had doubts about the tour operating today however, because the city was filled with runners. No one told us about the “Great Scottish Run”, and many areas and roads were blocked for this event. Sure enough, finding the tour office we discovered that indeed there would be no tours today. Another “Go to Plan B” day.

Instead we decided to walk to the “Old Section” of Glasgow and visit the Cathedral and the Necropolis. It was a bit of a walk but after all we had a day to waste. 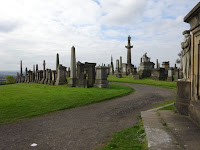 I have visited the “Cities of the Dead” in New Orleans, and the “City of the Dead” in Cairo, so the Necropolis sounded interesting. It is a cemetery built on the top of a prominent hill. Built in 1832 to solve a serious overcrowding problem in church graveyards, the Glasgow Necropolis was built as a business and a for-profit burial ground. Over 50,000 people are buried here but most have no markers. There are however over 3500 stones and monuments.

The hill is behind the cathedral and is accessible via a raised walkway crossing a road to a very ornate entrance. From there pathways in a garden-like setting wind up the hill to the top and gravestones and markers line the pathways.


Now, Glasgow was an industrial city with many self-made merchants, who wanted to be well known, and so the more important you thought your family was, the bigger the family plot and monument was. As you walk up the hill, you notice that the bigger grander monuments sit proudly at the crest of the hill, with the tallest and grandest for a man named John Knox, who was actually buried here in 1825, before the Necropolis was built. Most of the old monuments still stand proudly but it is kind of sad to see some fallen over and neglected. And there was one who ordered his memorial to be made of cast iron; I guess he had not heard of rust . . .

There were lots of common names such as Miller and Brown all over the Necropolis, and I was surprised at how few “Mac . . .” and “Mc . . .” there were, although I did find one “Hill”, but it was on the way up, not at the top.

Posted by Art.hill@gmail.com at 8:47 AM No comments: Links to this post