Skating on the Rideau 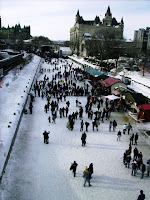 I have achieved another retirement goal. The first year our son Ryan moved to Ottawa for university we came up to see how he was doing over March Break, and there was still ice on the Rideau Canal, and people were skating on it. Ryan told us about the annual Ottawa Winterlude festival, and about how skating on the Rideau was a big part of the event. I decided then that it was something I wanted to do, but we were busy that year, I forgot my skates the next year, and the next the ice was gone by March even though I had my skates. By this time, retirement was just around the corner, and so I declared that skating on the Rideau would be one of my “Retirement Goals” - I would come to Ottawa during Winterlude, visit Ryan and skate on the Canal.

The Rideau Canal is part of the Rideau Waterway system, and extends 202 Km from Ottawa to Kingston. The canal is part of the 19 km of manmade waterways that connect the lakes and rivers on this UNESCO World Heritage Site completed in 1832, and still operating much as it did when opened. In the winter, Ottawa maintains about 7 km of the canal as the world's largest skating rink. The nice thing about this is that it is right in the heart of Ottawa, and is accessible by thousands of people from January to March.

When I retired in June last year, I set about proving to everyone that I didn't need to find work to be active, and I started doing all the things I had always wanted to do. Some of my goals were difficult – take up painting, write the novels I had been planning for 15 years, or renovate the house (Well, that;s my wife's goal really), but Skating on the Rideau was pretty easy; go to Ottawa, put on skates and go skating. Ryan said I could come stay with he and Arran, Airfares were reasonable, and I had nothing else planned for February.

When I started telling peole I was planning a trip to Ottawa, my dad and his wife said that they would like to come as well. Now the last time I was skating with my dad, I fell and dislocated my shoulder, so he, me & skating are not an automatic mix, but he is 80 now so I thought I might be able to keep up with him. With three of us travelling it became more logical to drive, and having no schedule to work around I simply kept an eye on Weathenetwork.ca, and choose a day with sunshine from Halifax to Ottawa. Then Dad's mother-in-law heard about the trip, and said that since we had room for another in the car could she come as well. So long as they were willing to travel my way, in my car I had no problem, and we had a lovely pleasant safe drive to Canada's capital.

Arriving in Ottawa Thursday evening, we met Friday to try out the ice. The Rideau Canal starts at the Ottawa River below Parliament Hill, and the city of Ottawa promotes skating on the canal as a major attraction during the winter. The city maintains the ice, puts special stairways to get to the surface, and benches to change into skates, places information about the canal , and installs a series of change houses, washrooms, and concession stands at strategic places along the canal. All in all, the city does an excellent job with this attraction.

The first day we skated 3 km down the canal, took a break with Back Bacon sandwiches, Beaver Tail treats, and hot chocolate, and then skated back to where we started. I knew that Ottawa “Maintained” the skating surface, so I had visions of teams of Zambonie drivers grooming the ice under cover of darkness every night, and discovered that this certainly wasn't the case, and the ice is well-used outdoor ice, with cracks, bumps, and rough patches, but it was a thoroughly enjoyable skate, even for me who had not been on skates since that afore mentioned dislocated shoulder incident. I went back on the canal on Sunday to experience the crowds during the first weekend of Winterlude, this time walking to the 3 km marker and skating to the beginning. Then on Monday, I waked down to the Byward Market to do some shopping , and then skated in the other direction, from the start all the way to the 4 km mark before getting off and walking back.

Now that this Retirement goal has been achieved, I will try to do it again next year. Ottawa is a lovely city to visit, and I have enjoyed seeing it in the winter this year as well as in the summer when it is all dolled up as Canada's capital city. Maybe next year I'll do the whole 7 km.
Posted by Art.hill@gmail.com at 12:17 PM No comments: