Sharing a ship with almost 2000 other folk, means sometimes having to line up for things like the dining room, pizza, or the ice machine, but you get used to it and the ships manage things well enough so that it is not much of an inconvenience.

Getting the best seats is another issue, and has been a BIG problem on some ships. The ships of the Carnival Line, for example, are known as “Party” ships and the popular spots are those loungers around the various pools or on nice sunny Caribbean afternoons, the loungers with just the right access to the sun. Trying to fit as many exciting activities into a small space, resulted in a severe shortage of the best loungers and I heard stories of fist fights resulting over prime locations. It is not unheard of to arrive on the sun-deck only to find every lounger already occupied by a book, a pair of shoes or a towel, and often these items sat there for hours reserving the lounger for someone. Although most ship crews do not like to perform discipline on passengers reserving prime locations, one ship actually had a policy of removing items left more than 15 minutes to free up chairs. There was a huge bin on the deck full of items “Left-behind” on chairs. On one ship I discovered an entire area with chairs occupied by items rather than people. I found a simple solution, by moving the chairs with objects obtaining suntans into the shade and bringing two chairs from unpopular areas into the area for us to use. It was worth it to watch the annoyed expression on people’s faces when they arrived back hours later to find that their prime location chairs were still waiting but were no longer in as quite a desirable location. I just sat there looking innocent.

Now that was on “Other” ships. The Holland America Ships cater to a slightly different, slightly more retired, cliental. Here, it is not a problem getting a nice comfy lounger up on the deck; they are mostly unoccupied. It is the comfy armchairs in the quiet corners with windows that are all occupied, and just as on the “Party” ships, the same strategy seems to be employed. I am constantly hearing folk putting the “Other Lines” down with their “lower class passengers”, but it is funny how those comfy arm chairs are being used to cradle old books, sweater vests, shopping bags, and other personal items while their owners are off attending lectures, having a pre-lunch snack, or looking for bargains in the shops.
Posted by Art.hill@gmail.com at 2:03 PM No comments: Links to this post

I enjoy cruising. I like the “boring” sea days where we just sail, covering distance across the oceans. Most people however go on cruise vacations to visit new towns, cities and countries, so the ships normally spend whole days tied up in various locations. Here passengers are expected to go ashore and spend their hard earned retirement savings supporting the local tourist economies. The boat normally sails overnight and often we just seem to mysteriously be docked at a new port when we get up in the morning. Unless you are up very early, you don’t feel or see this operation; it just happens. It is one of those necessary operations that the cruise lines try to do when it does not disturb people’s vacations.

Today, docking it Astoria Oregon, was different. Not only did we arrive later, my balcony provided a front row seat for the entire operation. As we finished breakfast I felt the ship slow, and so I knew we were approaching port. I got to watch the ship and saw how everything worked, from entering the port to actually getting secured to the wharf.


It is not a fast process, taking well over an hour from when we started maneuvering to when the gangway was opened to funnel the shopping-deprived passengers into the town. The ship first did a complete turn, basically spinning completely around, so later this evening when we leave we can sail straight out of the port. It is quite the sight to watch a 935 ft. ship slowly spin 180° in the water. Once this was done with tug boats, but now the ship thrusters make these work-horses of the harbor unnecessary, and the ship can turn on a dime and then slowly move sideways into place without making a ripple in my glass of wine. Once close enough to the wharf, ropes are thrown out from the ship and workers on shore catch them and pull first light ropes and then the huge heavy ropes which are used to secure the ship to the shore. No fancy sailor knots are required; loops are put over large posts on the wharf, and the boat winches everything tight.

Then once all the paperwork formalities are completed successfully, the gangway is attached, gates are opened and the tourist dollars start flowing ashore.
Posted by Art.hill@gmail.com at 2:10 PM No comments: Links to this post


My mother loved to garden, and years ago when she visited Butchart Gardens outside Victoria, BC, she could not stop raving about it, so when we finally made it to the west coast we visited, pushing a young daughter around the pathways in a stroller. We enjoyed it enough that we returned on another visit to Vancouver Island, and with a morning to spare before catching a ferry to the mainland, we went back again this year. As usual the fabulous plant and flower displays continue to impress.

The original Mr. Butchart produced Portland cement, and needed limestone for the process. Outside Victoria, he operated a large limestone quarry, and when it was exhausted his wife decided to turn the ugly hole in the ground into a garden. Over the years it grew until it was not only the quarry, but the surrounding properties and is now a popular tourist attraction pulling in millions of visitors every year.

The Butchart’s original house and property are now surrounded by beautiful gardens, and you can spend hours wandering through the various styles of gardens. There is the original quarry which has a beautiful fountain in one end, a Japanese garden, a rose garden, an Italian garden a Mediterranean garden and even a bog garden.

We have been here at various times through the year, and the gardens are always beautiful. The beds are constantly maintained by an army of gardeners; producing near perfect displays all the time. As we wandered among the flowers I noticed one corner that did not look that good, but returning a few minutes later, the offending non-perfect plants had been dug out and replaced.

My mother was right, the gardens are beautiful, and if you are visiting the Victoria area, a side trip to this attraction should be on your to-do list. But, really these pictures do a better job of describing Butchart than the writing. 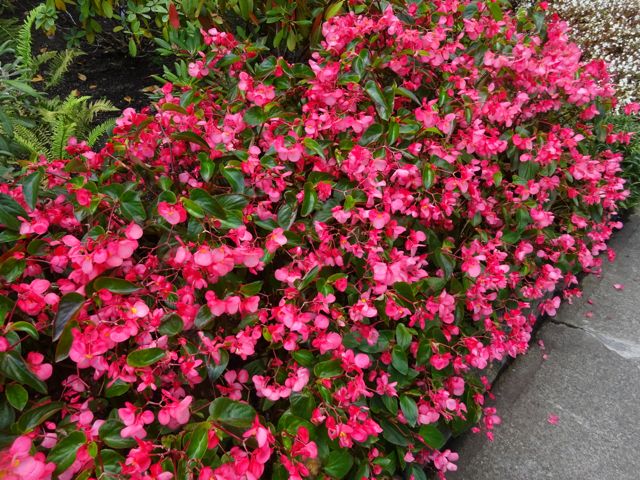 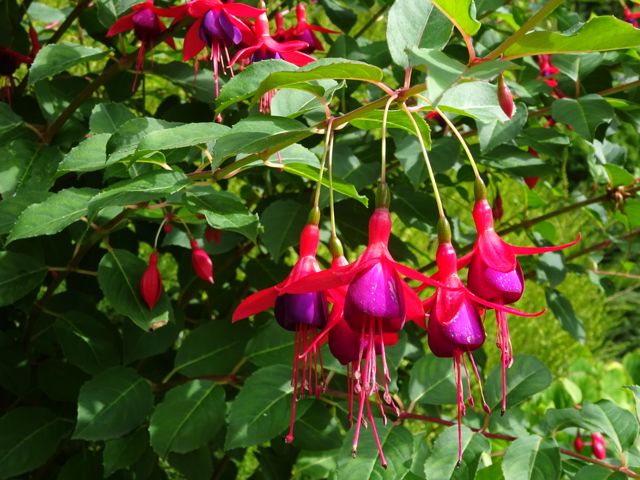 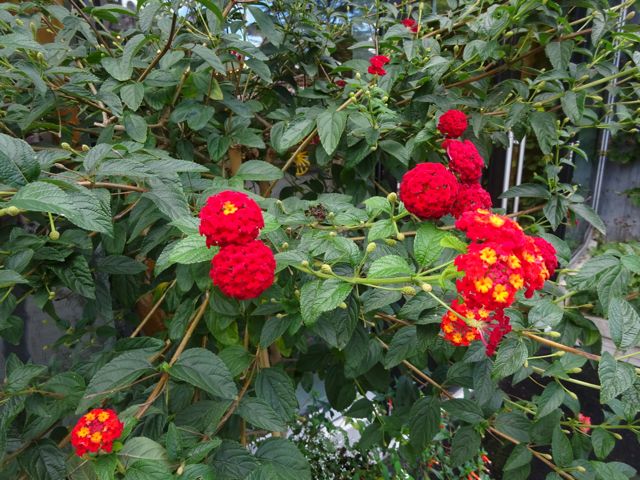 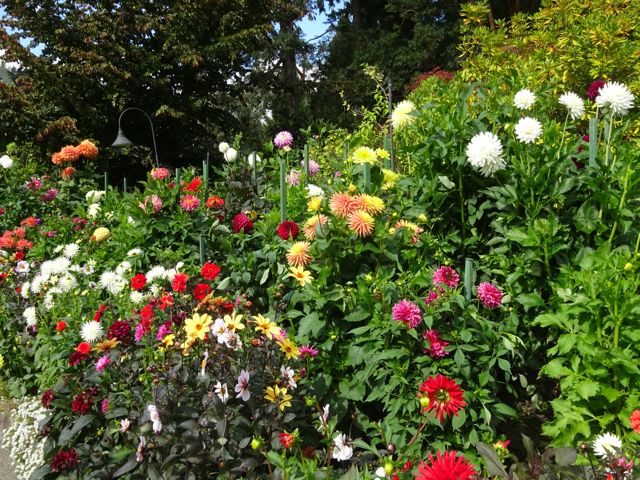 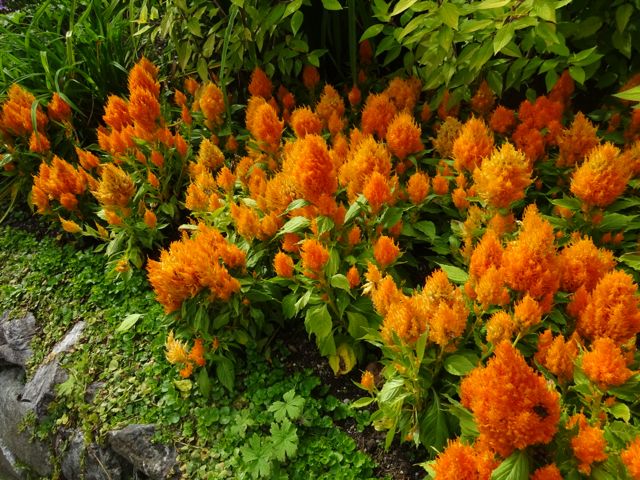 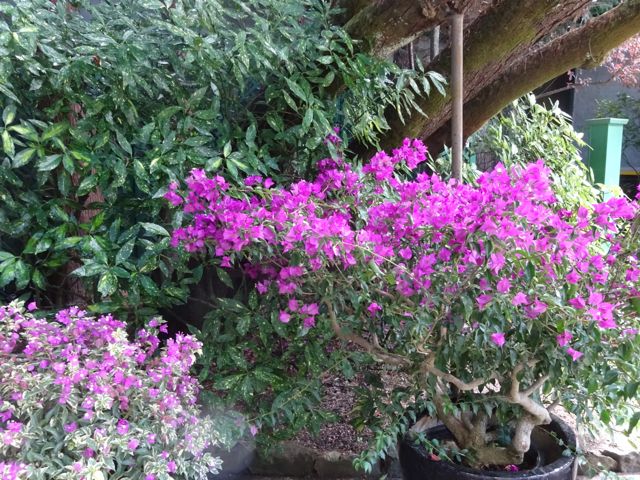 Living on the Water