An inuksuk is a simple statue made from stone, placed in a spot for others to see. Originally they were used a a navigation aid in the north to indicate a route through the barren northern landscape. Sometimes they were simply erected to indicate that “I have been here”. Some were simply a stack of stones placed in a way that they would not naturally appear so that others might notice them. Increasingly however a unique form of the Inukshuk in a roughly human form has grown popular. These are two piles of stones (legs) with a larger stone on top (Arms) and another on top (a head).

As I drove highway 11/17 north along Lake Superior on our way to Lac Seul to visit Alisha, I started noticing Inuksuit placed on rocks along the roadway. Although as you may recall, the drive up to Thunder Bay was through rain and fog, I still started noticing increasing numbers of these Inuksuit. Knowing I was coming back the same route, I decided to look for them on the way home and take some photographs and write about them. I noticed that they continued right through to Sioux Lookout and beyond on the route to Alisha's. I started watching for them, and once you start looking, it was amazing how many of these little statues there were. On some sections of highway, there was one on every rock along the way. Apparently a journalist for a newspaper in the region counted 98 on just the TransCanada 69 from Sudbury to Toronto, so there must be hundreds on the entire route we followed.

They were always placed on rocks beside the highway, and usually were high up. Some would have taken some rock climbing skill just to get where they were placed. I then started noticing that some were knocked down and now were just piles of stones. Obviously some people electing not to climb to the top of the highest rocks, had built their Inuksuk on low rocks. Easier to build, but these were devastated in the winter by the passing snowplows throwing the tons of northern Ontario snow off the highways.

On the way back down to Toronto I again looked for the many Inuksuits, and again noticed them for over 1000 kilometres. On this trip I could actually see them clearly, and stopped to take a picture for you. That route is not exactly the most exciting, with mostly trees and rocks . . . . so the little statues are a welcome addition to the landscape. 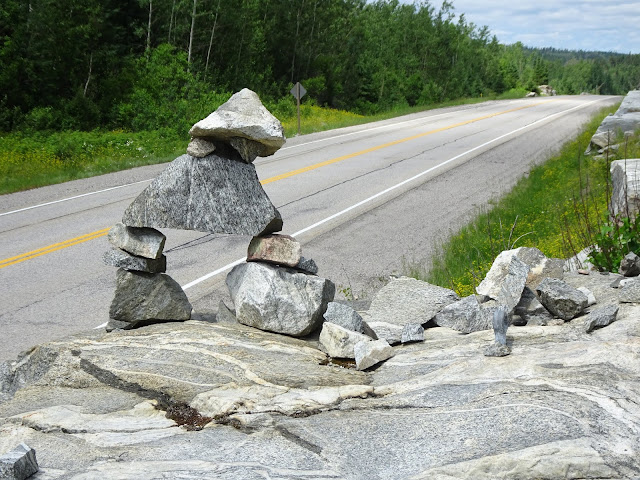 Posted by Art.hill@gmail.com at 5:25 AM No comments: Links to this post