When I found the alley full of street art, I thought it was pretty cool, and enjoyed taking pictures of all the garage doors, but then the next day I found another alley bordering on another park in another area of Toronto with the exact same decoration. I now suspect that it may be some sort of city sanctioned art project. I also notice that the background blue is the same on most doors and in both locations, so unless it is somehow a standard "Street Art" colour, some agency must have supplied it to the artists. In both these locations the alley runs alongside the park, so the art is very visible to anyone using the park, and certainly adds interest to the adjacent park. I wonder if there are other such installations?

So, here is more alley street art to enjoy. 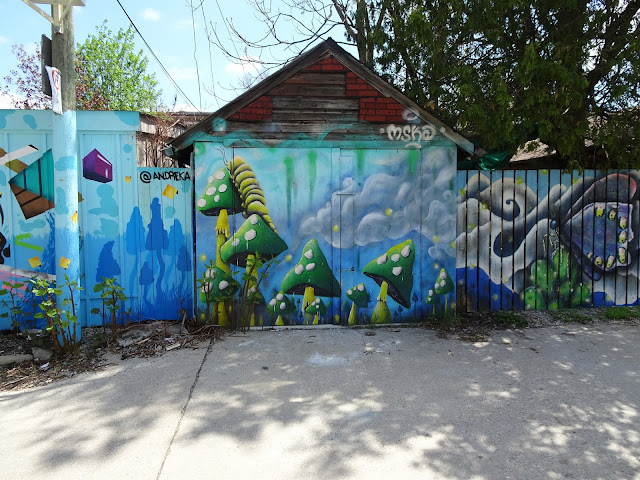 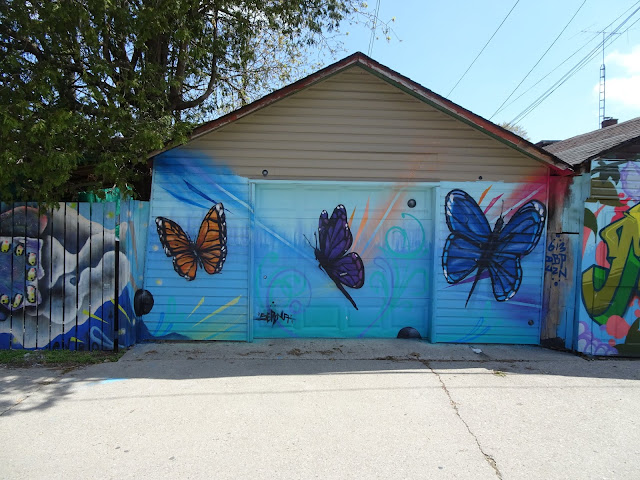 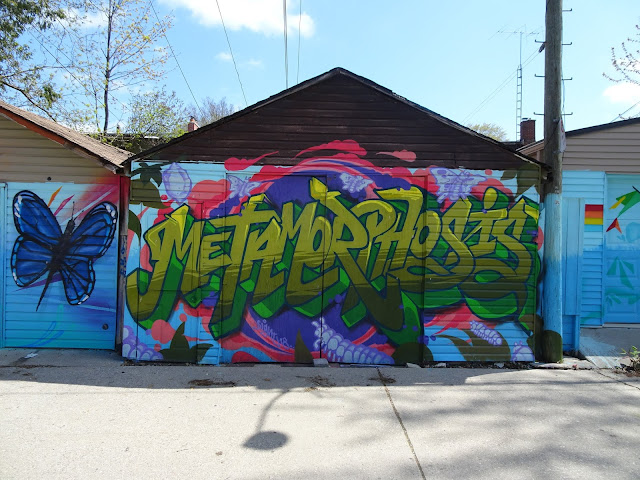 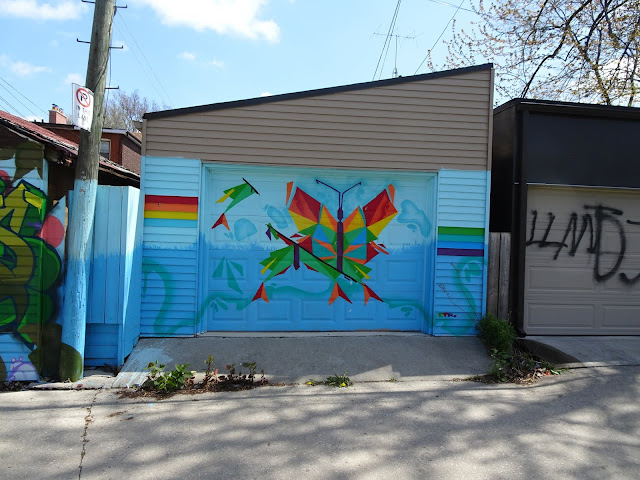 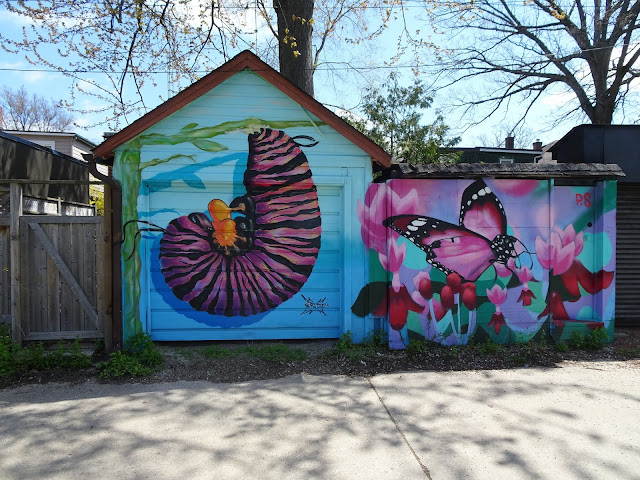 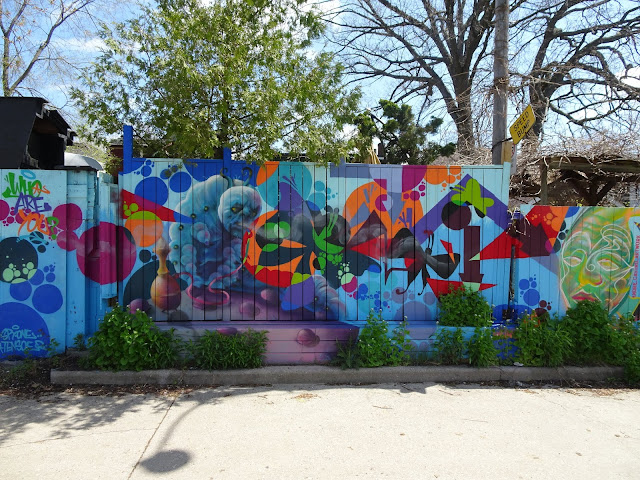 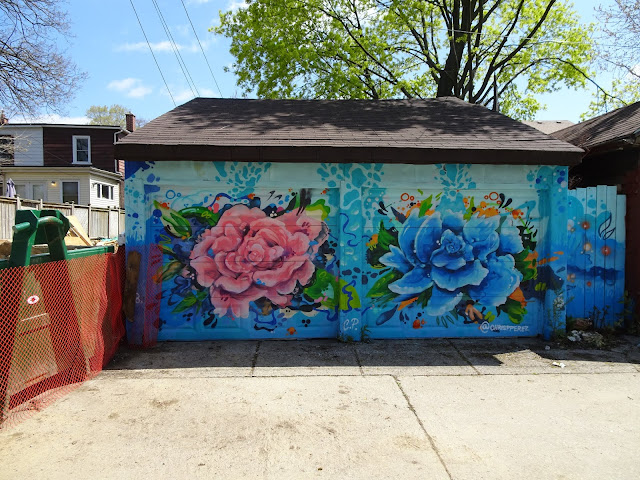 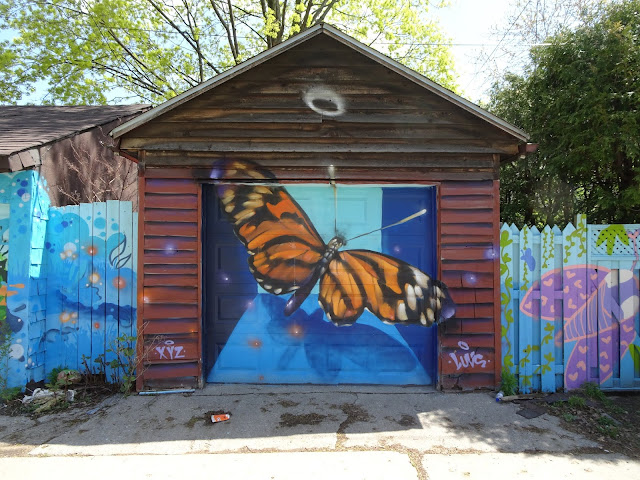 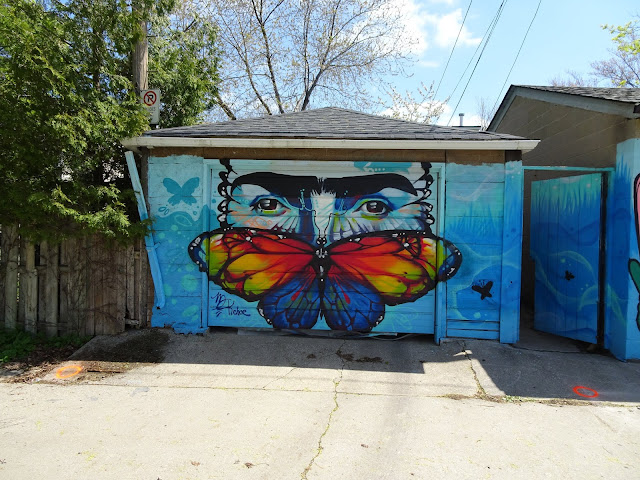 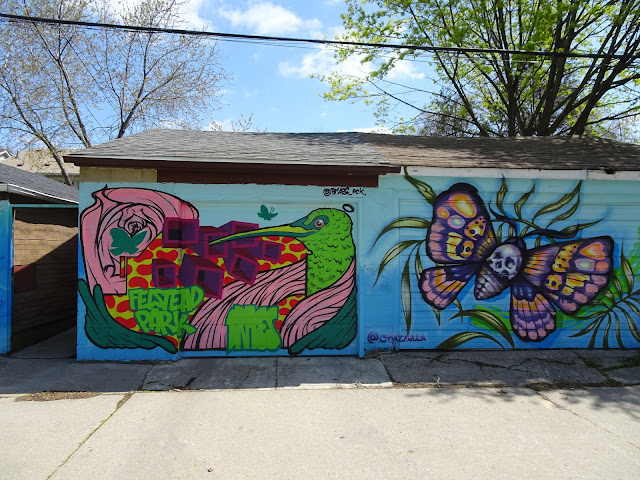 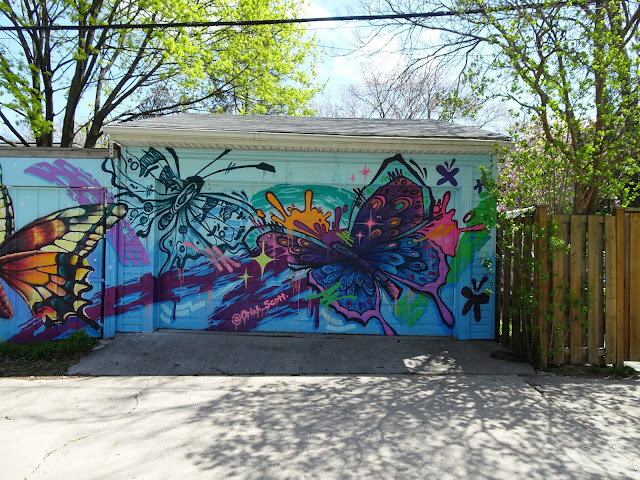 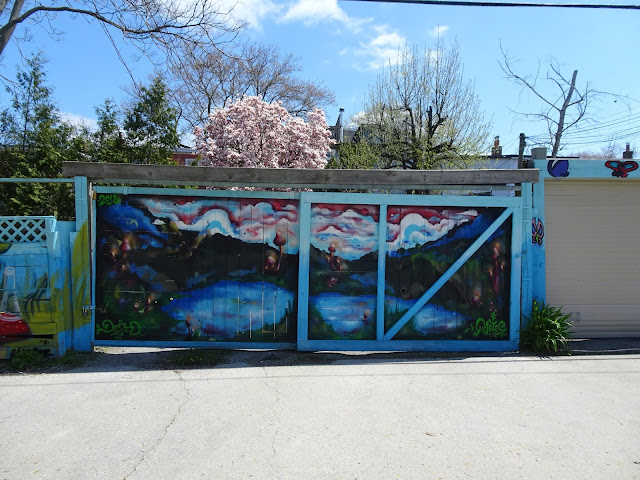 Posted by Art.hill@gmail.com at 5:27 AM No comments:

Working on the “Flusher” project for Ryan, we have gotten to see a lot of Toronto that we probably would not have visited if we were just up for a visit. We rented a car and spent two days visiting neighbourhoods in the east end and two more in the west end, leaving the central core for later when a car is a nuisance. The app is built around the city parks and their public washrooms, and most neighbourhoods have a couple of city parks in them.

Yesterday as we moved closer to the core of Toronto, we discovered that it was becoming increasingly difficult to find parking places, so sometimes we found a spot to put the car, and walked to a park nearby. I noticed at one point that there was another park close to the one we had stopped to inspect, and decided to walk there instead of driving. On the way back I came across this great collection of street art.

Neighbourhoods were once build with alternating streets and alleys. Houses always had a street in front where you showed your best side, and in the back was an alley where deliveries were made, garbage was collected and where you stored your car. Cars were then utility vehicles that got you from one place to another, so they were stored out back instead of today when you want to park your Porsche, Tesla, Audi, Mercedes, or BMW out front to impress your neighbours. This neighbourhood retained this back alley and when I walked through it, I discovered that all the garages out there had their door beautifully decorated by talented street artists, creating a beautiful display.

You will also notice that most of the garages down the alley have a different construction design, making the display even more interesting. 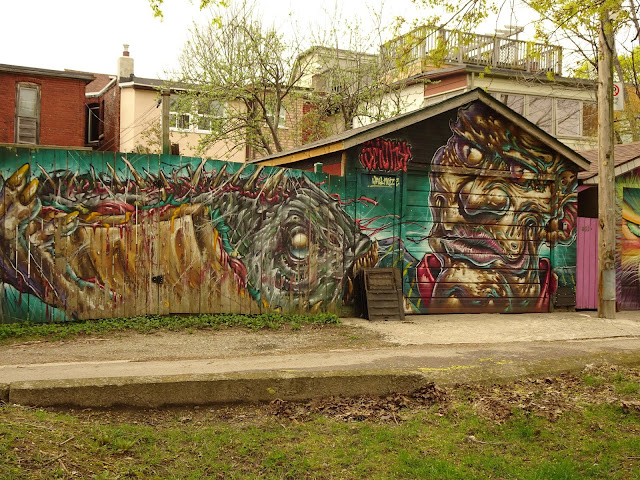 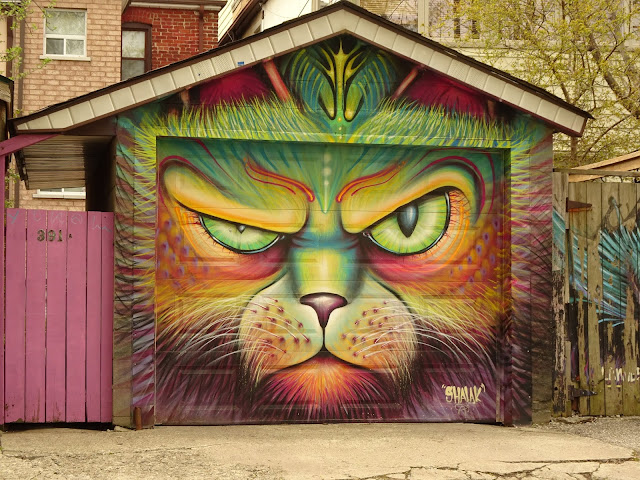 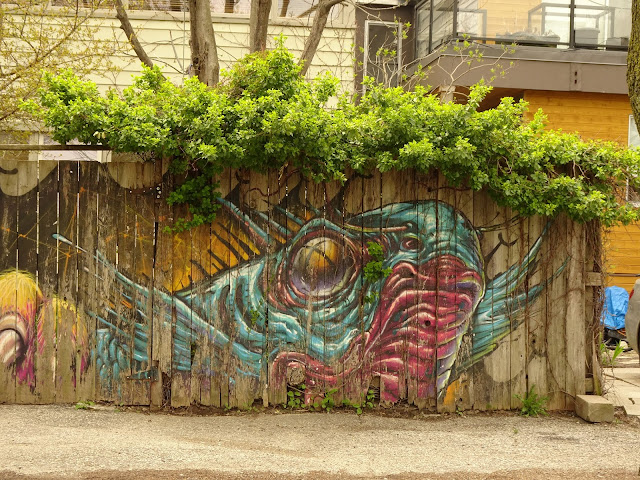 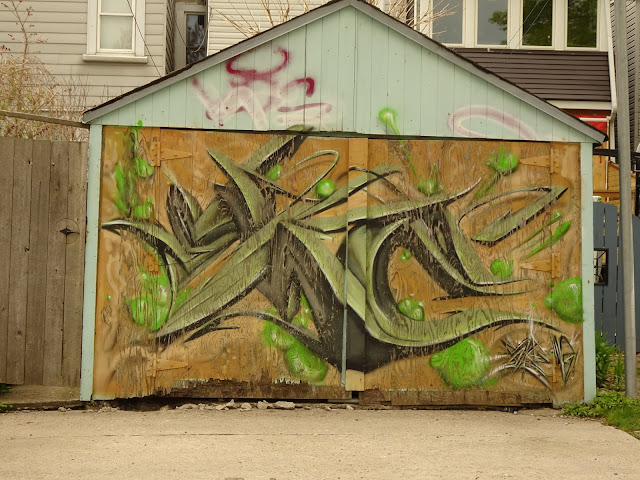 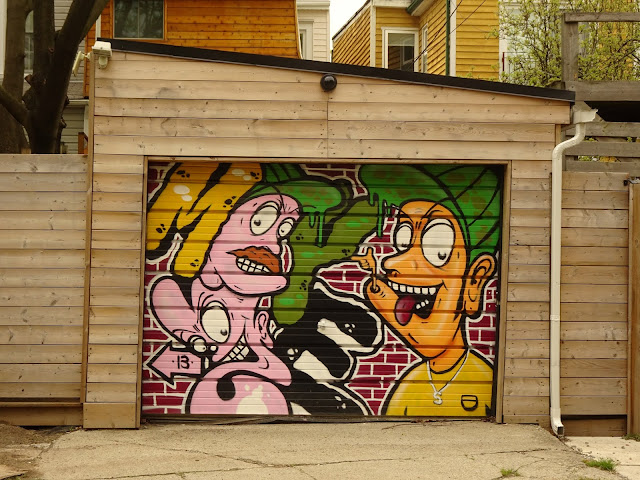 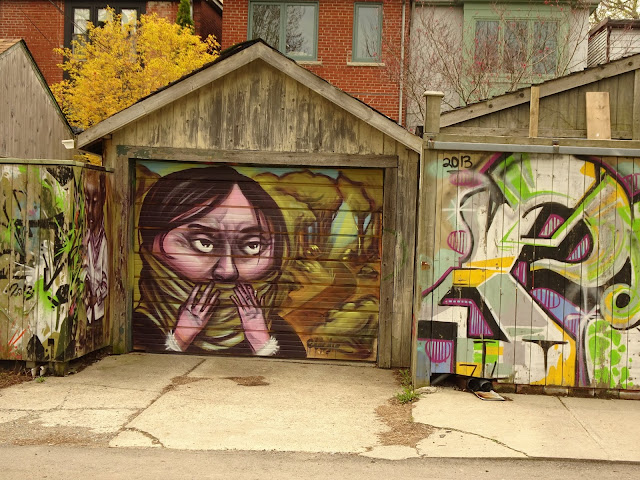 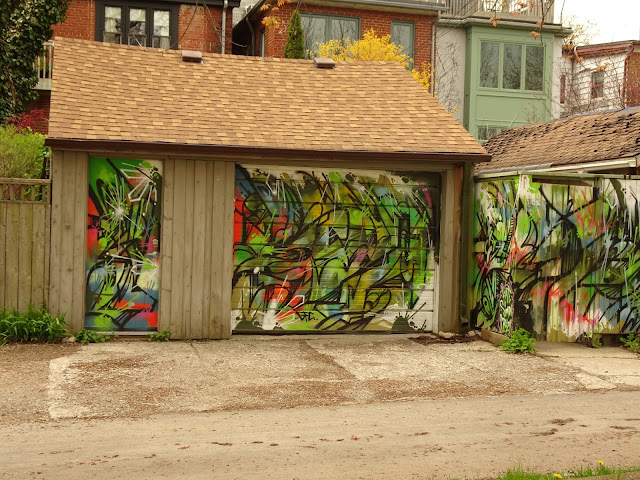 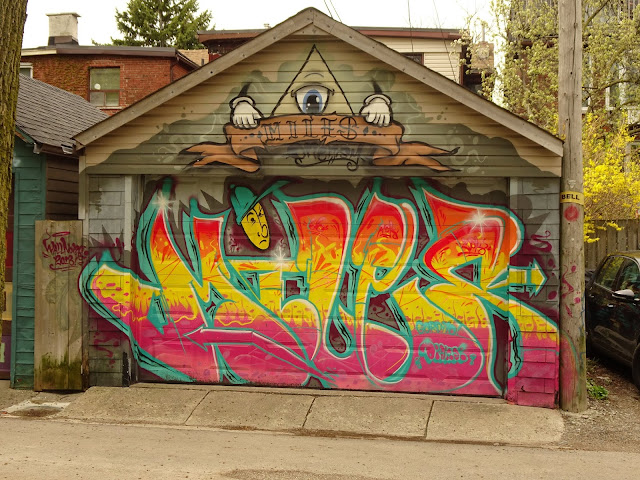 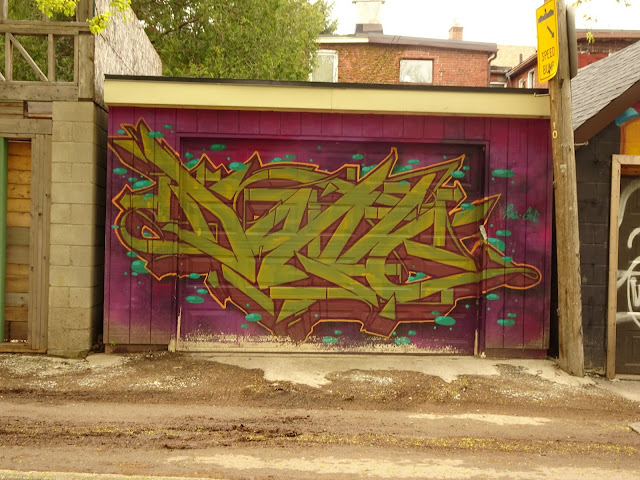 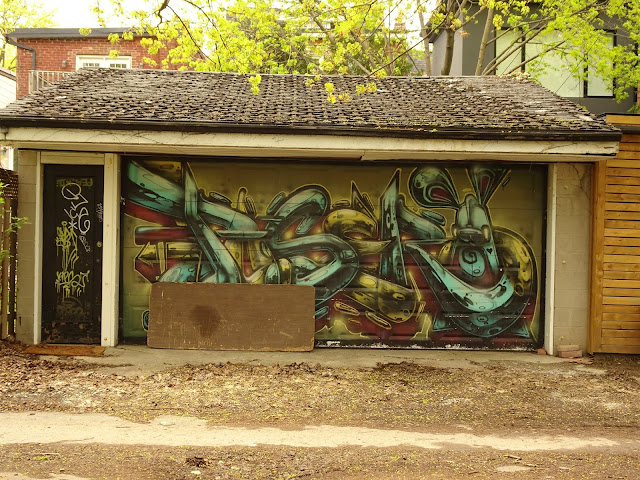 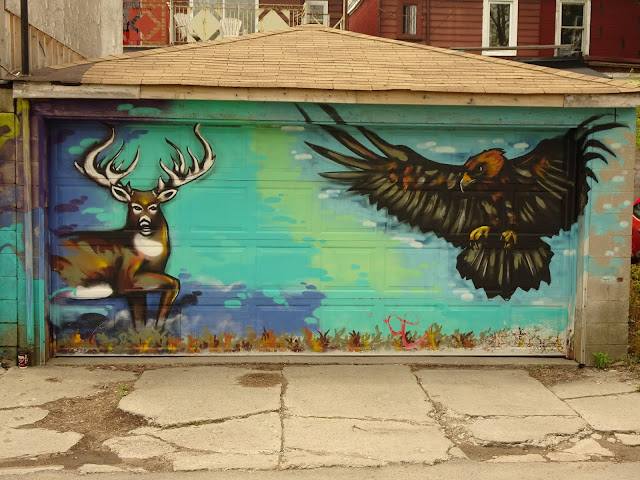 Posted by Art.hill@gmail.com at 4:49 AM No comments:

We came to Toronto on this trip to help Ryan and Ben with a project they were working on, but also intended to enjoy the city and see some of what Toronto has to offer. I have discovered through my travels that I really enjoy city life. I enjoy traffic so long as I no longer have to navigate to work through it, and I like experiencing the crowds of people that big cities can generate.

We discovered that the timing of this trip coincided with Toronto's Cherry Blossom Festival. Having experienced cherry blossoms in Japan and China, I was surprised to hear it was a big event here in Toronto. In 1959, the Japanese Ambassador to Canada donated 2000 cherry trees to the city in appreciation for the city accepting displaced Japanese citizens following World War II. Many of these trees were planted in High Park. Over the years other trees have been planted and parks all over the city now feature Japanese cherry trees. These trees provide a beautiful display of blossoms in May, and it has become an annual festival in High Park. The blossoms only last a short time, so everyone goes to the park when they are at their peek. We happened to be here at this perfect cherry blossom time, so decided to go have a look.

You tend to forget just how many people live in Toronto until you attend a festival like this. The
streets in the park are closed to vehicular traffic and parking is limited around the park, so we decided to use the subway to get there. On a Saturday the subway traffic is normally light, and it was when we got on at Yonge & Davisville, but as we travelled down the number of passengers increased until we were crammed into the cars with crowds of people. Changing trains from line 1 to line 2 involved most people moving on mass through the station to the next train headed towards High Park. Most of the crowd exited at the High Park stop and the stream of people was so thick there was security directing the crowds coming and going. There were so many people that they had to stop the exiting stream to allow the people leaving High Park to get down to the subway platform. We were a group of six and had to be careful to keep others in sight.


High Park is a large city park but there were so many people that the paths and roadways were constantly crowded, and as you got to the areas of the park where the cherry trees were, the crowds increased. Some of the nicest trees had such large crowds around them that it was difficult to get close, and some groups had laid out blankets and picnics under trees claiming the area for their group. It really was amazing how many people had filled the park. Everyone was snapping pictures and 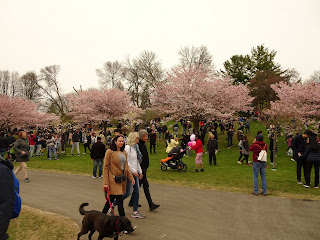 posing among the cherry blossoms.


Most people were there to view the spectacular display of cherry blossoms, but with crowds like this, I am always amazed at the people who are there not to see the blossoms but to be seem themselves. I am always surprised at the people who insist on bringing their pets into crowded situations like this so people can see their pets. Don't they understand that dogs get confused and stressed with so many people jostling for position. I especially felt bad for the tiny ornamental dogs trying to avoid being stepped on by hundreds of people towering above them, but the massive dogs who outweighed their tiny female owners looked equally uncomfortable with the crowds. There was even one fellow with what I think was his pet ocelot draped over his shoulders. Then there were the people who obviously dressed to impress, and
trying to out-shine the cherry blossoms, formal wear, steam-punk, costumes, etc. The Japanese background for the Cherry Blossoms was also obvious with a heavy presence of Asian visitors and some of the Japanese had dressed in beautiful traditional Japanese costume.


Overall the Cherry Blossom festival was an interesting experience, and I am glad we were in Toronto in time to take part in it.

Posted by Art.hill@gmail.com at 8:24 AM No comments:

My latest travel adventure is again in Toronto. Last month we visited Alisha and Derek to help with a house renovation and I think Ryan and Ben got jealous so we received a call about coming up to help them with a project too.

Working with a friend, Ryan is developing a phone app that will help people locate washrooms in and around the Toronto and Vancouver areas. Basically when you open the app on your phone, it identifies your present location and then displays any public washrooms in the area. Ryan asked us to come up and do inspection of over 150 washrooms so that information about them could be entered into the program. Things such as accessibility and amenities are important to people using the app. He had funding to hire someone to do this job, but was unable to find someone locally who wanted to do washroom inspections. SO . . he called his retired parents to help. It meant a paid trip to Toronto and an opportunity to spend time with he and Ben, so we said yes.

After some discussion about the best way to tackle the job, we decided to head out to the end of the Yonge St subway line and work our way through a cluster of sites out there to get a feel for exactly what was involved.

We exited the subway and opened the app which clearly directed us to the nearest washroom, about 30 minutes walking away. I was surprised that there were no facilities in or around the Subway station . . . but our job was to do the inspections so we set off following the directions to the first washroom. We walked down a residential street where the Toronto housing boom was evident with the little old houses on the street being torn down and replaced with huge new ones worth millions. We were then directed into a park and down into a ravine along a brook (Add note that this route not wheelchair accessible). We finally came out on the other side of the park where we found the washroom close to the park entrance and on a paved road. This might have been an easier way to get to the washroom.

Clipboards and checklists out, we finished this first inspection and headed to the next, about 15 minutes away in another municipal park. In this park we located three washrooms although the app only had two listed. Here we also discovered an amphitheatre and a ski hill along with a beautiful community centre. Who knew that Toronto had a ski hill within the city or an outdoor theatre big enough to host a Shakespearean Drama? From there we inspected washrooms in a Tennis club, a lawn bowling facility and another park. Fourteen Kilometres later we had discovered a lot more about this city than when we started.

We met a lot of people who wondered what we were doing, and who showed a great deal on interest and approval with the project. Everyone thought it was a very worthwhile idea and would be very useful to people. Seven down, lots more to do . . . . .

Posted by Art.hill@gmail.com at 8:13 AM No comments: